Let us start by confirming that I am my father’s daughter; now that is said, we shall move on swiftly. Walking in town and scrolling through social media have been the two most heart breaking things I’ve had to do lately. Am I the only one with a problem with how feminine our boys are in this our time. My heart broke when I saw this screen shot. 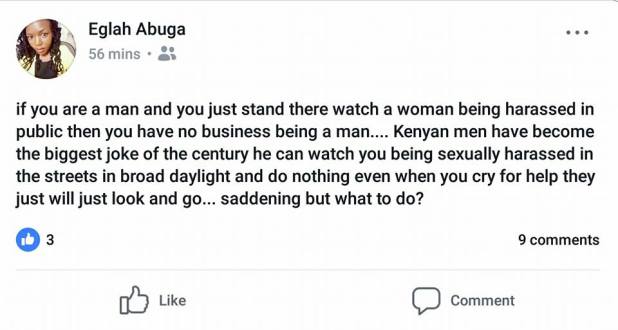 When did men abandon their godly role of protecting women? Yes, women are strong and independent but this will never change the fact that the male species is naturally physically stronger than the female. It is sad how we walk the street and face constant sexual harassment sometimes even physical attacks and men pass by not one bit bothered even sadder, some record the incidences.

I don’t know whether to blame it on parenting but I am not a parent and it will be unfair for me to tell right from wrong parenting. Should we blame it on adopting foreign cultures especially emphasizing on individuality? That might also not be appropriate considering the progress we have made in regaining and embracing our lost African cultures.

Why social media and the streets are nauseating for me is majorly male closets and their behavior. Our boys find it so okay to walk around in tights, some long stretcher tops, drooping beanie caps and weird shoes without socks. There was a Facebook post I made earlier about how I went on a date with a guy obsessed with photos of himself. He took a million photos of himself while on that date and spent a considerable amount of time trying to figure out what filter to use. His WhatsApp profile picture is changed almost every three days. Look through Instagram, the boy child’s account is an explosion of selfies with all sorts or filters and ‘duck face’ poses. Chei! 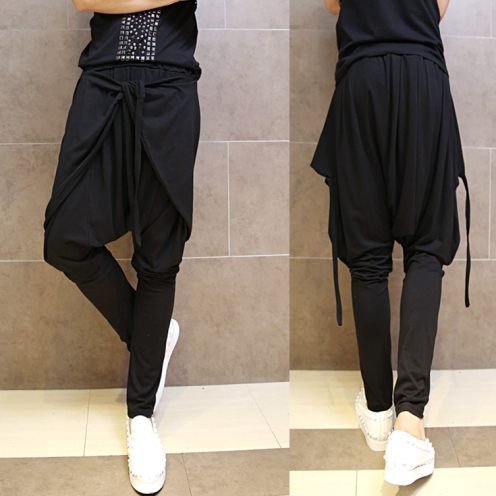 Boys in their teenage years dressed in sagging jeans and acted gangster mostly only when they were not around their parents. They later grew up to wear nice fitting pants, neat shirts and sweaters/jumpers/ coats; that did not look oversized or too small. Grownups were keen to advice young men to observe hygiene and try to be clean and neat. That did not mean trimming eyebrows and waxing their legs.

Correct me if I’m wrong but should men be bothered by their physical appearances for the most natural of things? I mean like hairy legs or bushy eyebrows? Shave the hair on your head or lock it, who cares, dress to impress, you can have a manicure and a pedicure no problem. I just don’t see why even men want to shave their under arms and man parts? This is a girl thing of which some girls (guilty) don’t mind observing much.

I once greeted some random male friend and I had to check my hands if I had poop on them. He greeted me with the tips of his fingers and when he knocked his hand on some table, he first checked his nails. I have called guys to ask if they can help me fix or carry something in the house and they suggested I pay someone to do it coz there are people who do just that. Am I being too hard on the boy child? I am not dating you if I’ll ask you to lift the sofa for me and you’ll be afraid for your nails or blisters. I’ll lift it myself.

Remember my first statement? I am father’s daughter, there are things I never saw my mother do while my dad was around. We were raised without gender biases but ultimately men protected the women. Only my dad and my brothers could open the door for guests at night. It’s them you had to call when you saw a rat or a snake. Right now I’d rather die of snake poisoning before I call the 25 year old neighbour. Only the men were sent to the shop after 6:00 pm. I remember my brothers literally beating up random guys who’d attack female strangers on the streets or at the club.

I was home recently and we heard a girl scream just outside the gate. We were bundled up in the house and the men of the house ran outside and even pursued the attackers who had knives and escaped on a bodaboda. The girl was grateful she had only lost her phone, that she had thrown at the attackers to distract them. 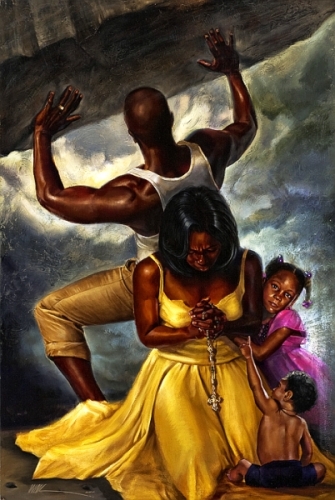 Question…are we raising these men now? Yes, they are not perfect men, some probably are cheats others are deadbeat dads but at the back of their minds they know, you must always provide for your children and a woman shouldn’t be hurt in your presence. I mean physical hurt, because right now we females are too savage I wonder if we still need emotional protection.

Maybe I’m just too Ol’ school … I might be a tomboy and I want to date and eventually marry, I just want to be able to tell, who the woman in the relationship is. Oh before I forget, ya’ll men PMSing especially on Social Media, sit down and be humble, we are the ones with periods, not you.

6 thoughts on “AM I REALLY SINGLE BY CHOICE”