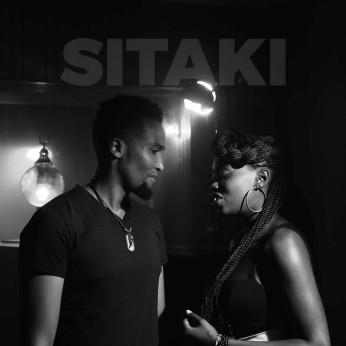 He appeared on Makutano Junction but I bet you wouldn’t have noticed him then. I guess he got your attention in the local TV production Pray n’ Prey. Pascal Tokodi is one hunk who is not only a talented actor but just as I learned recently quite the musician too.

At only 23, he has managed to intrigue his audience with some soothing music and a cup full of good looks. He decided to pick the route rarely taken by artists his age. He collaborates with the very talented upcoming artist Grace Were aka Acey Gracey to give us Sitaki. Their voices blend in a sweet surrender rising over notes and bounds to take you back to a time when you were in love.

The lyrics are a perfect word art bound creatively in Kiswahili and English. The song triggers a memory of being newly in love. When your stomach has butterflies, your mind does not think straight and you are day dreaming most of the time.

It is fulfilling that even in the era of hype and funk, there is a small portion of the 90’s kids who have a love for good, ol’ laid back music. The musicality in Sitaki is also on point. Instruments used sparingly, Pascal and Grace bring to life a dream gliding over highs and swimming through the lows to give you the ultimate touch of good music. You can hear the violin that is just what we’d say off the hook.

The video setting is simple, as they say simplicity is the mother of sophistication. Dim lit, foggy and a piano in scene.  It has been while since you heard such, so you better give it a listen.

Pascal has another single out called African Lady. This is your new sound and if you are in love with what you hear, weka mikono juu.